Who are the Brazilian English teachers?
Skip to content
Back 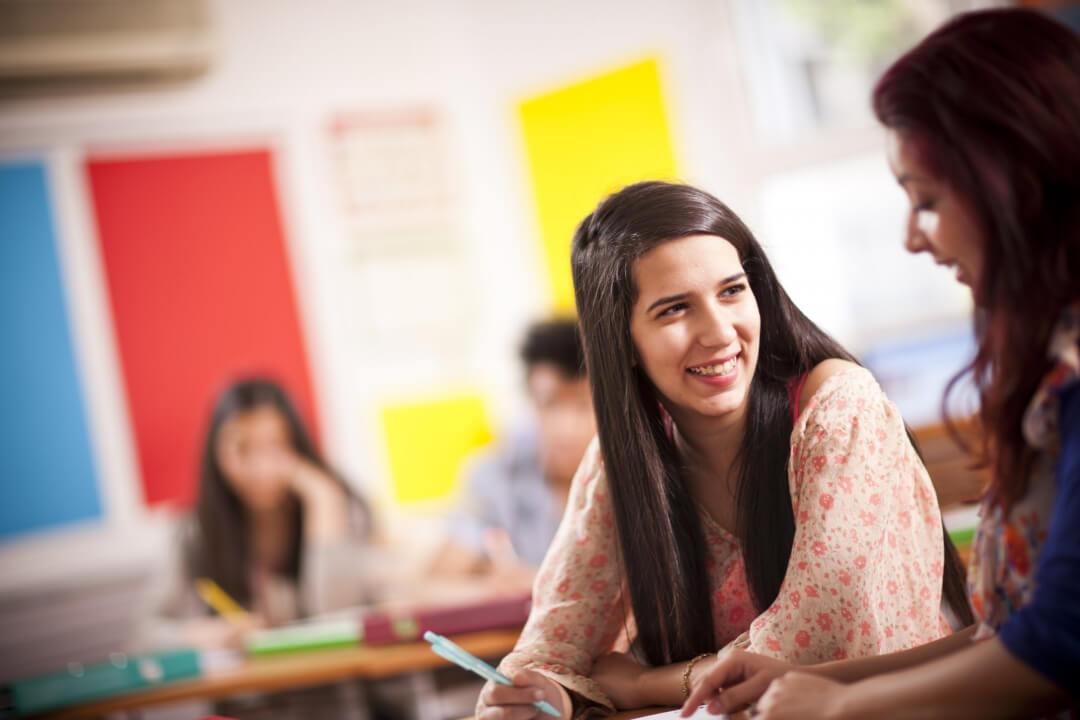 According to the 2020 School Census, 172,030 English teachers work in public and private networks in Brazilian basic education. If we personify this data, the largest portion of this group will be represented by a white woman (38.89%), with a degree in higher education (44.64%) and, maybe, a specialization (43.79%). She works in more than one school (1.44) and with more than one education level (1.63). If she is from Maranhão, she is likely to have three different English classes. If she is from Espírito Santo, she might have just over 12 classes. When we look at the smallest portion of the group, it is also a woman who represents it, this time, an indigenous woman (0.3%). Black women, who occupy 24.56% of the universe of English teachers, have discrepancies in the level of specialization: between white and black women, the percentage of specialized teachers drops from 43.79% to 35.07%. In the case of indigenous people, more than 50% attended only high school.

These are some of the data provided in an analysis of the School Census 2020, carried out by the Observatory for the English Language Teaching, which proposes a deepening on the understanding of the reality of English teachers in Brazil to awaken reflections on gender and social inclusion. The initiative, which is part of the UK-Brazil Skills for Prosperity programme is based on a strategy to promote equity, not reproducing stereotypes and guaranteeing access to more disadvantaged groups. 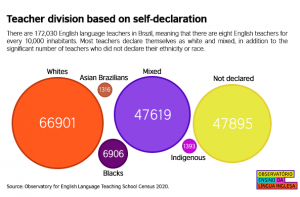 The challenges of each day

Ana Karolina Vitor, part of the lowest percentage of black female English teachers in the country, is in the seventh period of a Licentiate Degree in Letters – English, at the Federal University of Alagoas, and has been a teacher for three years. In addition to teaching as a volunteer in the Support Programme for Students in Public Schools of the State (Paespe), which prepares students from public schools for the National Secondary Education Examination (Enem), this year she began teaching at a private school, to secondary education classes, with 4 to 10 students per class. The teacher in training already knows the difficulties of each teaching network: in the private one, lack of interest from students who have technology and resources to learn English at home. In the public network, the reality of those who do not have enough resources to give priority to studies. And, if the pattern was already latent in face-to-face teaching, the pandemic caused by Covid-19 aggravates the situation even more.

To ensure a quality language learning process, it is necessary to have opportunities to practice different skills, such as reading, listening, writing and speaking, in order to make it more contextualized and closer to the students’ daily lives. The guideline, even present in the Common National Curriculum Base, proposes that English is no longer to be seen as a foreign language and its status as a lingua franca should be recognized. That is, a language that has been increasingly appropriated by speakers of different native languages ​​and that has been transformed in this process, as a mediator of communication between people from different parts of the world. This perspective opens up possibilities for students to feel more confident in using the language in different contexts.

“I try to do activities that encompass the four skills, but with the lack of student participation, I can’t get a satisfactory result. In this way, I end up resorting to less dynamic teaching methods, which makes the teaching of the language stagnant and return to patterns that no longer fit us”, says teacher Ana Karolina.

According to a survey carried out in 2015 by the British Council, the lack of resources is the main difficulty (81%) for English teaching — only 24% of public classrooms have access to the internet. In the distance learning modality, adopted because of the pandemic, it is still difficult to know how many students can access a quality network at home. “The lack of resources is always a problem and, honestly, I always have at least three different plans for each class because of that”, says Ana Karolina. In addition, since she started teaching, she lost count of how many students about to take the Enem ended up not giving importance to the discipline, due to the lower volume of questions in the test compared to other areas of knowledge.

The context is repeated with Ewerton Cunha, an English language teacher for 20 years, who has already taught language courses for public schools and now works at a private English school. A resident of Belém (PA), he is part of the 6% self-declared black teachers in the state. “I think that, in order to change both the private and public networks, they should change the format of the classes, making English more contextualized and communicative”, he defends. For him, the lack of structure for teaching English is added to behavioral factors of the students, which also affect the quality of learning, such as the use of constant translation and the difficulty of assimilating adulthood.

The analysis of the School Census carried out by the Observatory brings yet another relevant data in relation to the adequacy of qualifications of English teachers. The Law of Guidelines and Bases (LDB) – Law 9,394/1996 – provides for a minimum higher education level for teaching, which is currently not complied with in any of the states’ or Federal District’s networks. The offer of the English language reaches more than 985,000 classes across the country. However, most classes seem to have teachers with inadequate degrees (70.58%), according to data from the School Census 2020. Given this scenario, there is a small percentage of classes with teachers with partially adequate degrees (0.18%) and still a percentage of 8.87% of the classes with professors without higher education. 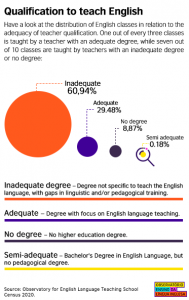 Also, on average, an English language teacher has 303 students. Regarding the work regime, the survey reveals that the state networks are the ones with the highest percentage of classes with temporary teachers (36.3%), followed by the municipal (27.96%) and federal (13.71%) networks — the latter is the network in which 85.93% of the classes are attended by permanent teachers. It is worth emphasizing that the School Census does not collect information about the contracting regime by the private network.

Given the crossover between ethnic/racial cuts and the work regime, it is noted that the highest percentages of professionals with temporary contracts are found among classes taught by indigenous teachers (75.61%), followed by those taught by black (28.56%), white (21.77%), undeclared (20.63%) and yellow teachers(18.43%) teachers. 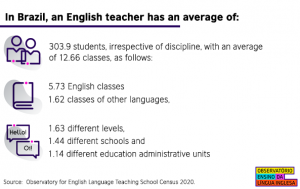 For Vander Viana, associate professor at the University of East Anglia (United Kingdom) and researcher involved in the study, this context deserves special attention. “For us, professionals in the field, it is very common to hear that English is not learned in Brazilian schools, especially in public schools, and that the root of this problem is in the teacher who, supposedly, was not trained properly. What the analysis of the Census shows us is that there seems to be a bigger issue related to the lack of qualifications of this professional who teaches English, which needs to be investigated”, he observes. The survey shows that only 29.4% of teachers meet the requirements of the LDB. The teacher claims compliance with the law among Brazilian schools: “If the teacher does not have the proper degree, how can one say that the problem is the training?”, he asks.

The data collected by the study portray a reality that is now distant, when there was no pandemic. It is still difficult to know what the new panorama of learning English in Brazil will be like, with distance learning and the deepening of common challenges in the face-to-face modality, especially among the black population, who have less access to technologies. Regardless of this, Vander proposes reflections on the inclusion of minorities in higher education institutions: “Quotas are a very interesting instrument, but it is necessary to think of more ways to encourage the participation of black and indigenous students in higher education”. According to the 2019 Higher Education Census, white students (43.07%) are still numerically superior to black people (38.62%) in universities. 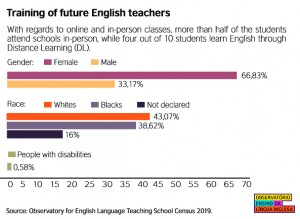 Regarding basic education, professor Ewerton considers that it is necessary to awaken a new look at the language. “In Brazil, people have no taste or interest in learning English. Most do it out of obligation or necessity, not out of a real desire,” he says.

This disengagement, according to Ana Karolina, may be due to the lack of representation, such as teaching materials that commonly illustrate only white-skinned characters — even in a country with a population composed of 56% of black people (number referring to the sum of browns and blacks), according to IBGE 2019. “I understand that this movement is purposeful, made to show that the language does not belong to these people. English is a globalized language, which means that fluency opens doors. If minorities have more opportunities, the power structure would change”, analyzes the teacher. Would it be possible to change the rules of the game?