English language and ethnic-racial equity: why are we still so far away?
Skip to content
Back 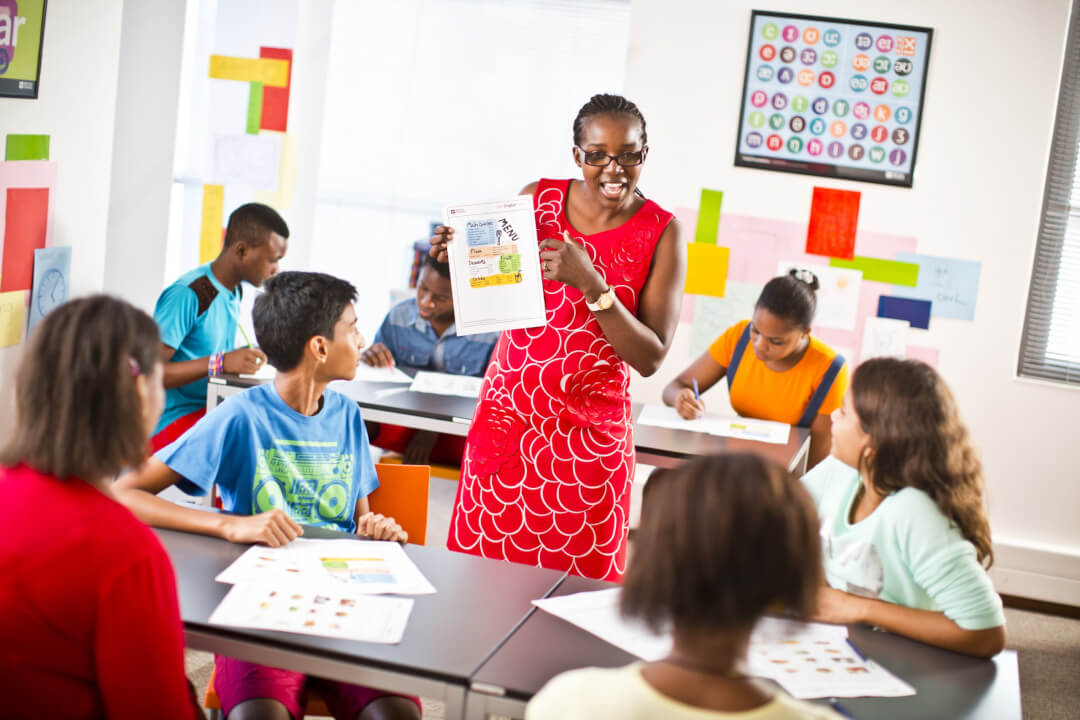 Provided for by Law 10.639/2003, the mandatory inclusion of the teaching of Afro-Brazilian, and African History and Culture in the curriculum of schools in the country has been in force for almost 20 years. The structural racism that remains present in institutions, even though our country is made up of descendants of indigenous people and several immigrants, mostly self-declared black and brown, makes it necessary to implement legislation that requires the rescue of Brazilian ancestry in the school environment. But are reinforcement strategies and application policies sufficient?

This problem motivated the Observatory for the Teaching of the English Language to map the teaching of additional language in the country under the bias of black and female representation. The platform is part of the Skills For Prosperity programme, present in nine countries, which aims to support economic growth and poverty reduction, providing young people and disadvantaged groups with access to quality education and the development of skills for the world of work. . In Brazil, the search for representative education permeates the analysis of laws 10.639/2003 and 11.645/2008, which guide the teaching of Afro-Brazilian culture in schools, and the interpretative study of school socioeconomic data.

It is worth mentioning that the mapping developed by the Observatory was made from the School Census and the Higher Education Census and is available in the platform’s data area. It is an opportunity for users to learn about graphs and studies on how English is doing in networks at the municipal, state, and federal levels.

Challenges in language teaching and learning

“We do not have a policy for learning English in Basic Education offered by the public sector, and we do not seriously invest in teaching and learning additional languages in basic school education”, laments Telma Gimenez, professor and researcher at the State University of Londrina (UEL). Along with Vander Viana, the professor is co-author of the study “English Teachers in Brazil – portraits of a profession based on the School Census and the Higher Education Census” (in Portuguese), developed by the Observatory.

Also, according to Telma, this investment involves considering that essentially practical subjects, such as English, require adequate conditions, such as fewer students in the classroom. In addition to the lack of structure, according to analysis carried out by the Observatory, with the data from the National Institute of Educational Studies and Research Anísio Teixeira (INEP), most classes do not have English teachers trained in the area. For example, in high school, the percentage of teachers who do not have a degree or Bachelor’s Degree in English can reach 76%, directly impacting the opportunities and quality of learning offered to students. 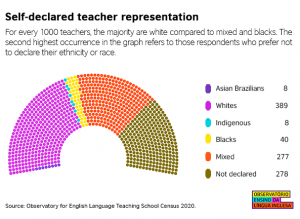 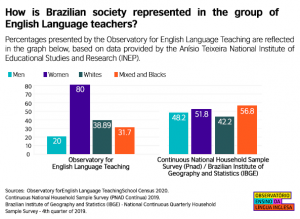 On the other hand, for there to be engagement at the time of studying, it is necessary to arouse the motivation of the students. The lack of it is generally linked to the difficulty of imagining themselves as a language speaker, which leads the student to believe that language is “just another school subject”. One way, according to Telma, is in representation. Teaching should allow learners to see themselves represented in teaching materials and offer tasks that place them as users of the language to create a sense of belonging to these communities and legitimise the appropriation of English as a form of expression of their daily identities. “Proposals that homogenise or that do not recognise the diversity of race and ethnicity can generate little investment in this learning”, warns the professor. In the data provided by the Observatory for the English Language Teaching on the race and ethnicity of the teachers, almost 40% declared themselves white and 32.6%, black and brown – a significant difference compared to the proportion of the Brazilian population (56%, according to IBGE 2019) – despite the 28% share of undeclared in the survey.

“It is necessary to give visibility to black men and women, promoting critical racial literacy in schools, so that future generations become aware of the inequalities that can be produced by curricula that erase their presence in the community of English speakers”.
Telma Gimenez, professora e pesquisa da Universidade Estadual de Londrina (UEL)

Afro-Brazilian history and culture: necessary transformations at school and in the world of work

With the motto #GetTheLawOffPaper, the social company AfroeducAção has been working since 2008 on the production of strategic actions for Brazilian racial equality, encouraging the application of Law 10.639/2003. “There are, yes, schools that carry out projects throughout the year based on racial equality, but at the national level, they are considered exceptions. The law is only guaranteed to be applied during the week or on Black Consciousness Day, in November”, says Paola Prandini, director and co-founder of the organisation. It reinforces the need to implement continuing education for teachers: “What we have today is legislation that tells us the importance of applying the law, but not necessarily how to apply the law,” he adds.

While inclusion in education progresses slowly, the market is increasingly demanding the agenda. Sátira Machado, a professor at the Federal University of Pampa and a specialist in Afro-Brazilian studies, recalls that technology giants have already begun to dialogue with the subject, pressured by the global movement Black Lives Matter. Companies like Microsoft, Facebook, and Amazon promise investments to foster inclusion and programmes for hiring black people in management positions. In Brazil, companies like Itaú finance projects to amplify the production of knowledge about Afro-Brazilian and indigenous cultures. “In 2021, Brazil is celebrating 50 years of the first celebration on November 20th, a date that is recognised throughout the country [being a holiday in many cities]. It is a unique moment to rescue the histories, cultures, and memories of Afro-Brazilian culture in Latin America”, she points out.

But if the market evolves and education does not, the barrier for students with little additional language training grows. More than expanding access to better jobs and financial and social advancement, English can be an invitation to collective debate. “Knowing English potentially increases the chances of Brazilians engaging in the global dialogue about possible solutions to problems that affect speakers of different languages, such as climate crises and the preservation of the planet, but that share the effects – often devastating, of decisions that happen on stages, where this language is privileged”, explains Telma. “Having more Brazilians speaking English gives breadth to their voices, which are so necessary both to celebrate our virtues and to engage, together with others, in discussions and actions that require the participation of many”, she adds. How many are still seeing from outside?