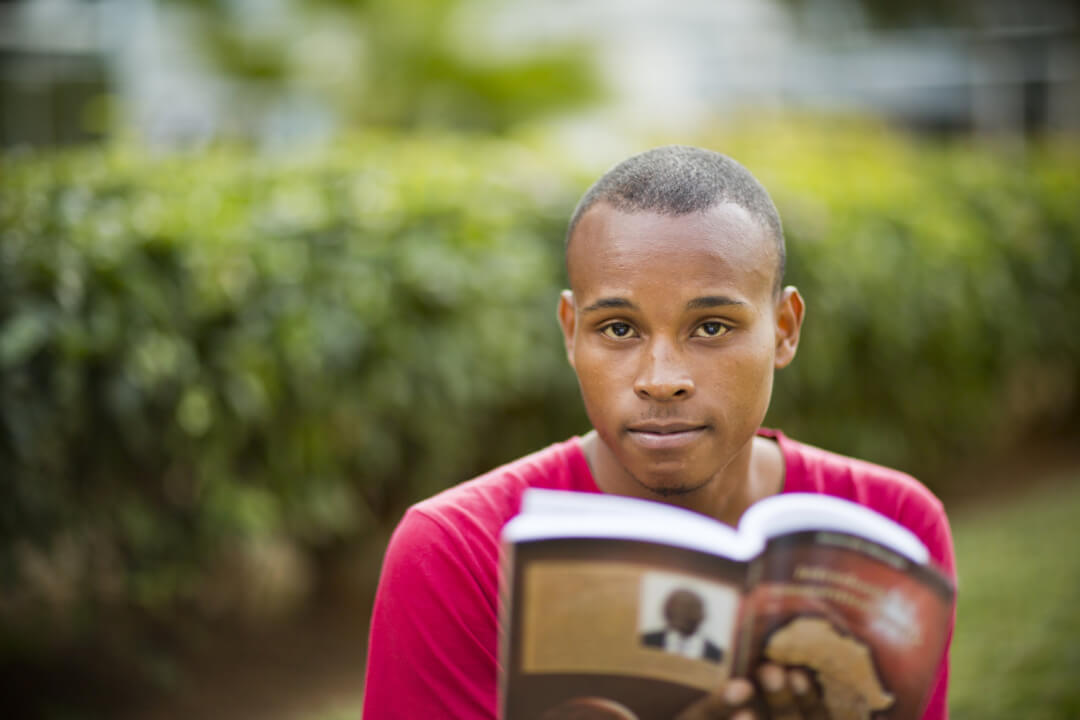 The concept of decoloniality, which emerged with Latin American thinkers in the first decade of the 21st century, criticises the hegemony of the worldview and Eurocentric narratives and proposes to give space and voice to the people who were colonised, valuing their manifestations and knowledge.

In teaching English, the use of this perspective allows contact with these productions, which for a long time were disregarded. It also allows a critical look at the teaching of the English language – questioning the reason for learning a foreign language – and the debate of global issues that reach local relevance, like the discussions involving structural racism.

Camila, an English language teacher at the Federal Fluminense Institute (IFF), Macaé campus (RJ), where she has been working since 2014 with high school classes integrated with technical education, technical education subsequent to high school and Proeja (youth and adult education), Camila França Barros works within that perspective. In this interview, she talks about the importance of bringing decoloniality to the classroom, how this concept relates to the teaching of the English language, how it is to work with this perspective, and the advantages for the student.

How did the decolonial perspective arise in your teaching practice?

When I joined IFF, I had contact with other teachers who were already studying this topic. Besides, I started working exclusively for IFF, leaving the routine of having three or four jobs at the same time, in which I needed to do what was most practical and quick, like using the didactic material to prepare the class. As a result, I had more time and freedom not only to assemble my material and conduct classes as I believed was the best, but also to develop research and extension projects with my students and exchange more with other teachers. And, from 2017 to 2019, I coordinated an extension project, the Centre for Afro-Brazilian and Indigenous Studies (Neabi). The set of these factors was fundamental for me to incorporate the decolonial approach in my teaching.

How did your performance specifically at the Afro-Brazilian Studies Centre influence English language classes?

At Neabi, I had two high school scholarship students, developed research with them, and held weekly meetings to read texts related to this topic. As it was an extension project and I had to give it back to society in some way, I developed several initiatives, such as holding rounds of conversation and a photographic exhibition for the community. We also participate in fairs outside the school to present our work and visit schools in the city hall to talk about structural racism, stereotypes, and prejudices. Although it is not a project linked to the English language, it is impossible to disconnect it from my practise in the classroom and from the material I prepare, which now have this decolonial look.

How is your classroom work? Could you give some examples?

I have always enjoyed working with textual and audiovisual productions, such as poems, articles, videos, films, and music in English. Before I used Hollywood film productions, at most British, then I started to question that and want to talk about other cinematographies. I began to look, for example, at what is being done in English in Africa or India. Also, I started to analyse the role that Hollywood cinema played in reinforcing stereotypes and to discuss issues such as the participation of black, indigenous, or native peoples in these films and the way they are represented. The look changes a lot both in the selection of the material and in the approach.

What do you prioritise when selecting material?

I diversify textual and thematic genres to get students to reflect critically on society, on how we got here. In that sense, I work in an interdisciplinary way because I’m taking a piece of history – for example, American civil rights – and working with English-language material, such as the poems of the author Langston Hughes or the documentary The Rosa Parks Storey. I want my students to learn more than the vocabulary and grammatical structure of the English language. I want you to know a little about the history of this country whose language they want to speak.

How can the decolonial look influence English language teaching?

The student must understand why she/he needs to learn English, what the language is for. And the teacher should not teach English only to students who are going to travel abroad. We must have this critical look at teaching English, not romanticisation. The focus should not only be on American or British English but on bringing other productions to the classroom that, for a time, were left out. It is necessary to give voice and space for them.
I work a lot with TED talks. I propose original productions in English for students to listen to, but not necessarily spoken by Americans or British. I already took, for example, TED talks by Nigerian writer Chimamanda Ngozi Adichie, as “The danger of a single history” [https://www.youtube.com/watch?v=D9Ihs241zeg&feature=emb_title].
Decolonial is also in the sense that English is neither American nor British – it belongs to everyone. I don’t want my student to worry about whether her/his English is perfect because she/he is speaking with an accent close to American or British English. We need to deconstruct this idaea. There is no perfect English. We use English to communicate. If you are communicating, it is perfect.

What other advantages does this approach bring to the student?

In Brazil, there is a myth that English is not learnt at school, especially if it is public. The student believes that she/he will only learn English if she/he takes a private course, an exchange, or lives abroad. So, the student who has access to an English course does not give much value to the school’s English. The poorest student who does not have this access, and thinks will never be able to travel, also does not understand the importance of that class and does not believe that she/he can learn something.
In this context, an advantage of adopting this decolonial perspective is to show the student that the class is not just about learning English. When producing the material itself, it is possible to take to the classroom a debate that leaves the global and goes to the place, i.e., that affects the student’s reality and has the potential to engage him.

Could you give an example?

If I am talking about civil rights, in the 1950s and 1960s in the United States, the student may think that this has nothing to do with him. But, if we look at Brazil in 2020, we see things happening here that have everything to do with what happened there, even if here we have not had segregation and theoretically have all the rights guaranteed. In this way, the student sees himself represented, understands the importance of discussing this, and understands his place in this debate. He will look at this content with another interest, which goes beyond the language. This attracts a lot more, and I see it as a big advantage. Even the fluent student may have completed seven years of English and never discussed human rights in the course. But, working like this, will also increase your vocabulary and repertoire.

You are the creator of a short film project, which has already become a tradition among students of the 2nd year of high school at IFF Macaé. How is this project and how is decoloniality present in it?

The short film project is not directly linked to this theme, but this look is in our work in general, as we always have this perspective.
The project appeared in 2016 as a bi-monthly work. At the time, I had three classes from the 2nd year of high school and asked students to produce a short film, lasting 5 to 10 minutes, in English, with subtitles in Portuguese. The theme was free, and each class made a film.
To engage the students, I said that teachers from other disciplines would also watch the productions to choose the best film, script, and actor. This competition between classes made them work hard. And, on the day of the exhibition, the auditorium filled up. The whole school went to watch. By involving other teachers in the vote, they became interested in the project and also wanted to participate.

How was the integration of teachers from other disciplines in this English project?

In 2017, all English teachers from the 2nd years of the high school participated, in addition to teachers of Portuguese and literature. The activity then ceased to be bi-monthly work and became a project of the language team. Instead of three, we had seven films, one from each 2nd-grade class.
To dialogue with Brazilian literature, the production of short films also started to have themes. In this year of 2017, the theme was the deconstruction of the idaea of ​​romantic love from the reading of romantic classics. In the following years, the project grew even more, with the participation of teachers of geography and sociology. We also created an interdisciplinary evaluation board. In 2018, they had to write an authorial tale based on the characteristics of Machado de Assis’ realism and transform it into a short film in English. In 2019, the theme was human rights, and we had films about the LGBT population, refugees and migration, obstetric violence, and sexual harassment in the workplace, among others.

And how was the production of the short films during the pandemic?

In 2020, after the suspension of face-to-face classes, they were only resumed in October, through remote education. For now, I’m working on podcasts. I asked students to produce a script. Each week, they deliver a piece of the work, and, in the end, they will record the episode in English. Towards the middle or the end of 2021, one possibility is that they work with animation, so they don’t have to meet in person. Let’s see how things go.

Decoloniality and language teaching: perspectives and challenges for the construction of embodied knowledge in the current political scene